This might have been done before, but without starting a riot, who would win in a fight with Lunar 1's party vs. Lunar 2's party?

Since the parties in both games change a lot let's stick to these characters:

Assume all abilities are unlocked, and everyone's at max EXP. For the sake of the fight, let's stick to Sega CD's abilities, but also note PSX abilities when needed. (It matters for characters like Ronfar). 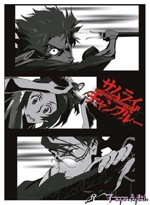 However, I feel like the characters from Lunar 1 were stronger individually. This might have just been me, but when I was playing through Lunar 2, having just one person faint kinda threw off my whole balance, whereas in Lunar 1, if everyone fainted leaving only one person still standing, it wasn't all that big of a deal.

I need to do some more analyzing first

In a stat fight, anyway.

The biggest weakness Lunar1 has is Nash, who, paired against Jean, is no match for her at all. Jean hoses him quickly.

At that point, Jean can help her friends pick off the rest of Lunar 1's party by doubleteaming them.

None of the Lunar 1 characters can hose their counterparts quickly, so Jean's advantage eventually pulls a win off.
Don't blame me, Lucia promised me lots of snuggles and cuddles if I would be her PR guy.

Silver star had the better party by a longshot. The characters had more personality and in my opinion, it had stronger side people (like laike)
I'm baaaack....
Top

hmm...hard to say. I remember Jean's moves being total ownage so I cast my vote for the L2 crew.


Edit: This would make a really funny flash animation. ^_^
Top

I'm gonna have to go with the Lunar 2 crew. Between Hiro's Poe Sword, Lemina's Magic Shield, and White Dragon Protect (assuming items are allowed), and the fact that Nash is dead weight in the Lunar 1 party, Lunar 2 would totally win.

Since we're going strictly power-based, then it definitely has to go to the Lunar 2 party. Break it down by party and person to see what I mean...

For TSS:
Alex - heavy hitter, heavily armored--but, all his powerful magic spells eat up way too much MP, and he'd be reduced down to just sword attacks in a few rounds.
Kyle - heavy hitter, heavily armored, but nothing else
Jessica - cleric class, equal to Ronfar. She'll just be healing
Nash - useless by the end of the game... his spells are so weak by comparison that the TSS party may as well have only 4 people
Mia - great spells, so long as she stays in the back

For EB:
Hiro - heavy hitter, decently armored, and his main magic spell is cheap enough in MP to use every round
Ronfar - cleric class, equal to Jessica. He'll just be healing
Jean - fast hitter, so you know she'll be able to act first before each round if you need some emergency healing
Lemina - great spells, so long as she stays in the back. Plus, she has a good magic shield spell
Leo - heavy hitter, decently armored. Like a second Hiro

So in all, you have Jessica and Ronfar cancelling each other out. Nash is insignificant for TSS's party, and Alex's magic runs out way too quickly--and can be easily negated by Lemina's magic shield.

I used Nash as a physical attacker much of the time (at one point in the game he was actually more powerful than Alex using the best weapons they had available then), and Jessica as well. One thing that was convenient about TSS is that Alex and Mia also had healing spells and Mia had the Recovery Cane so Jess didn't always have to be the healer. It's been a while since I've played, but I'd put Jess above Ronfar for fighting, definitely. She had more attacks and range -- though it's hard to judge the latter since TSS used moves instead.
Top

It seems to me that it would be a fairer fight if you used the PSX stats/abilities. Those two games have much more similar battle systems than the Sega CD games have. Also, Alex's Sword Dance makes him a much more even match against Hiro with his Poe Sword, and he'd also have White Dragon Protect. And on top of that, the addition of Nash's status-altering magic in SSSC could make him more useful than he is with just the thunder-based magic he has in TSS. He's very fast in combat, and it's possible that he could toss out a status-altering spell in the first round of combat that could really swing the battle in favor of the Lunar 1 team.

Triple Sword does about 700 per swing.

Hiro has the agility advantage.

Battle Order:
Jean
Nash
Hiro
Alex
Jessica
Ronfar
Leo
Kyle
Mia
Lemina
Don't blame me, Lucia promised me lots of snuggles and cuddles if I would be her PR guy.

Good points, guitar. The problem is that SSSC's spells were positively emasculated compared to the rest of the games', with even Mia only getting eight spells rather than the twenty-plus she has in TSS, not to mention so many stupid spells like Fear Litany. The SegaCD EB and SSSC seem the closest match to me, though they're still not much of a match with SSSC's stripped-down arsenal.

The whole stat-comparing thing is stupid anyway, though, because the games' balances are obviously different. For that matter, is that 700 for Triple Sword against enemies with comparable defense to Alex's with dragon armor?
Top

Ok, in the end I think I have to say Lunar 2's team. Anyone from L2's team could easily own Nash. I think Hiro or Leo could take out Mia (as in, the team's main magic attack powerhouse) faster than Alex or Kyle could take Lemina (I think so, anyway). Speaking of magic, I felt like Lemina had stronger magic than Mia. Catastrophe vs. Flameria. No contest. Plus if she's allowed White Dragon Protect, it'd be all over for L1. Jessica and Ronfar are basically equal (both healers, both had adequate attack/defensive strength). Leo could probably take Kyle. I'm sure Hiro and Alex would be basically evenly matched.

A big advantage L2's team has over L1's team is that the Dragon powers can be distributed amongst the team, rather just one person being able to cast them.

But yeah, like Alunissage said the game balances are different. If both teams were in the same game, it'd be a totally different story.
Top

Triple Sword does about 700 per swing.

Hiro has the agility advantage.

That's where Nash comes in. If he successfully casts a Paralyze, Charm or Mute spell (does he have Mute magic? I don't remember off the top of my head...) on Hiro, that gives Alex time to get out a White Dragon Protect spell.

Well, if you assume Alex as as tough as the Chiros in Nall's cave...it's actually 400 a hit.

But Chiros halve all damage, and Alex doesn't, so.
Don't blame me, Lucia promised me lots of snuggles and cuddles if I would be her PR guy.

Actually, you know what sounds even better than pitting the casts of Lunar 1 and Lunar 2 against each other? Having them both team up and beat down on the cast of Lunar: Dragon Song.

I dislike comparing HPs of one game to HPs of another because the game systems are not identical. For a gross comparision, it's like saying all the characters in FF7 are stronger than anyone in EB because they have thousands of HP and do thousands of damage. They're not stronger. It's just a different game system.

So Hiro's Triple Sword - Alex's defense = die in one hit isn't an valid argument. Not unless they're using the same battle system, which they're not. They're certainly related systems, but they're not identical.

I voted for the TSS party because in TSS they beat up everything thrown at them without a problem. I never struggled in that game.

The EB party had a challenge getting through the game. They died a lot. They can't even make an organized run for their lives.

Therefore, I think if we pit them against each other, the TSS group is stronger. They had an easier time clearing the obstacles on their quest therefore they must be more competent.

You have taught us the pity to live.
But I will not forget the beauty of life itself.
--Hyuui Riin, Phantasy Star II
-- http://www.sabrecat.net/ --
Top

Yeah, comparing HP systems is very silly. It's just as silly to say that TSS's party would win because you could always run, and they could simply run away to level up before fighting.

Ah, but if it were a boss fight, then TSS team couldn't run. But EB's team, well, because in EB you had Angel Tears, Hiro and company could resurrect their fallen party members. Therefore, EB would definitely win because it's possible to raise people who's HP drops to zero.

See, it gets to be very silly when you get right down to it. This is a comparison of characters, not of game mechanics. KF
~Kizyr

Lets put stats aside for a second and I think what he meant is a fight like in a anime type scene...

I vote Lunar 2 because Lunar 1 they struggled to beat Ghaleon, but Lunar 2 they defeated a Dark God Zophar... so Lunar 2 wins this.
"Not Ghaleon Dear Quirk.. Magic Emperor Ghaleon!"
Top

You have taught us the pity to live.

But I will not forget the beauty of life itself.

Users browsing this forum: No registered users and 1 guest